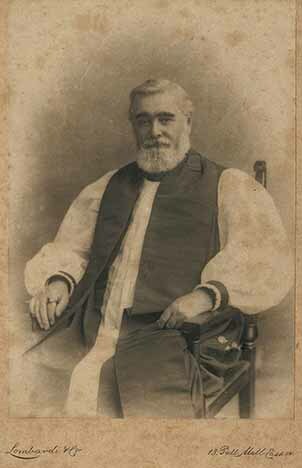 The Most Reverend Archbishop, Enos Nuttall, gave 50 years of outstanding service  to Jamaica and the Church of England. Nuttall came to Jamaica in 1862 as a Wesleyan lay missionary and joined the Church of England and was ordained  a priest in 1866. He was appointed curate of the St Georges Church on East Street in Kingston. Nuttall was consecrated in England as the Bishop of Jamaica on October 28, 1880, a post he held until his death. As Bishop he was responsible for directing the affairs of the Church of England in Jamaica. Nuttall was elected Primate of the West Indies in 1893 and in 1897 the position was renamed Archbishop, making him the first Archbishop of the West Indies.

Enos Nuttall was a very prominent figure in Jamaica’s social history. He became significantly involved with matters related to education and social welfare  to aid in uplifting the majority black population.  He was a key figure in the restoration of Kingston after the 1907 earthquake.

Enos Nuttall died on May 31, 1916 at the age of 74. He was buried a day later on June 1 which was also Ascension Day. He was suffering for a long time with the ailment known as Shingles. In his diary there is a vivid account of his final days especially references to him getting ever weaker. According to a report in The Daily Gleaner Nuttall’s funeral was one of the largest ever witnessed in Jamaica.