History of the Panama Canal The French using laborers to fill cars at Empire 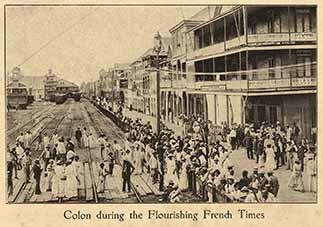 Colón during the flourishing French times

The Panama Canal’s rich history dates back to the 1500s when Spanish explorers got a view of the Pacific Ocean while exploring the Darien. It was then that the idea was born to either find a water way between the Atlantic and Pacific oceans or to construct a canal across the Isthmus of Panama.

...Or like stout Cortez when with eagle eyes, he star'd at the Pacific—and all his men look'd at each other with a wild surmise—Silent, upon a peak in Darien...

-  On First Looking into Chapman's Homer by John Keats

Prior to the building of the Panama Canal, ships had to sail to the southern end of South America in order to get across North America. This journey took months; merchants and businessmen needed a quicker route. With the California Gold Rush at its peak, construction began on the Panama Railroad in May of 1850. The railroad would pave the way for the canal construction later and marked the first phase of West Indian migration to Panama.

The French followed by the Americans led the construction of the Panama Railroad and Canal. The French Canal efforts were initiated in 1881 under Ferdinand de Lesseps, builder of the Suez Canal, who formed a company and obtained rights for a canal, valid until 1904. The Panama terrain proved very challenging and the French phase of construction was abandoned after nine years. Still they had done a great deal of excavation work.

Phase two of the Canal work began in 1904. Construction this time was under the direction of United States army engineer, Colonel George Geothals. The Canal was completed and on August 15, 1914 the first ship passed through. The Americans would retain control of the Panama Canal and surrounding area (Canal Zone) until it was handed over to Panama in 1999. In 2007 work began on the expansion of the canal which is slated for completion in 2015.