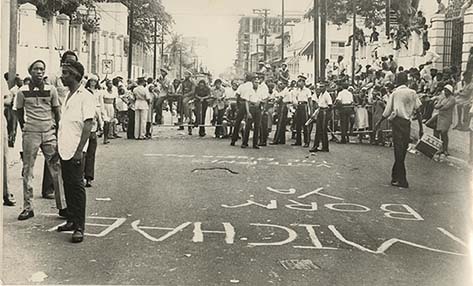 Other energetic ones engaged in a competition to see who could paint fastest. As soon as a JLP supporter daubed his party's symbol in the street in white, it was erased with black paint by PNP supporters who covered the spot with 'Vote PNP' painted in yellow.

Later in the afternoon there was some disturbance involving stone throwing on both sides and the police used tear gas to disperse the crowd from directly in front of Gordon House and restore order. The police stood guard all day and in the afternoon, reinforcements were sent for."