Inspection of the Guard of Honour 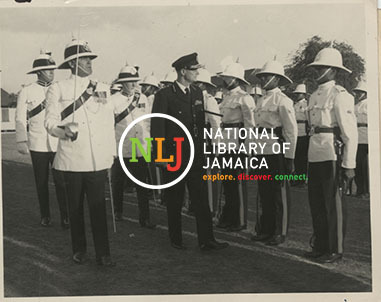 Inspection of the Guard of Honour

"Colonel W.A. Muller, Inspector General of Colonel Police (in dark uniform) inspecting the Guard of honour at the review given at the Police School and Training Depot on Saturday afternoon. Accompanying him down the lines are Superintendent J.T. Beatt, Commandant of the Training School, Colonel Reginald Michelin, Commissioner of Police (at rear, right) and Supt. G.E. Lipson. One of the most colourful functions ever staged by the police, the occasion was praised by Colonel Muller for the training organisation, attention to detail and keenness displayed by all branches of the Force. He said that the Jamaica Constabulary had progressed immensely since his last visit here three years ago."

Permission to reproduce this image must be obtained from the Gleaner Company.