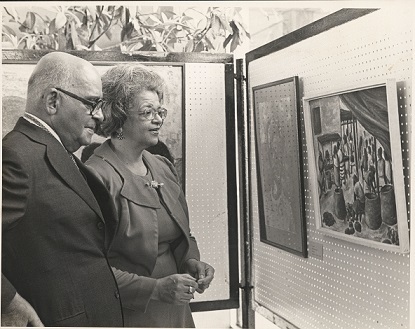 "Jamaican High Commissioner Wills O. Isaacs and Mrs. Isaacs viewing "Market Scene" a Carl Abrahams painting which won the New York Critics Award in 1967, at Ottawa City Hall, Canada, last week. This painting was in the exhibition of Jamaican paintings entitled "Mirror of a People" and was part of the Caribbean Festival Week sponsored by the City of Ottawa, at City Hall. Twelve of Jamaica's leading artists were featured from paintings lent by Jamaicans in Ottawa. The exhibition was arranged by two Jamaicans resident in Ottawa, Mrs. Maxine Bedyn and Mrs. Zandra Taylor, daughter of A.D. Scott of the Olympia International Art Centre."