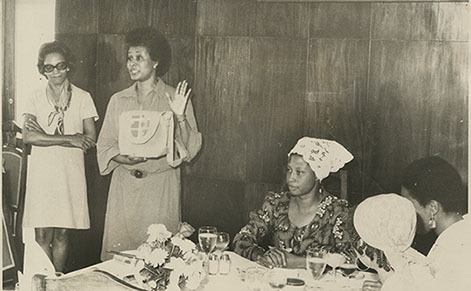 "Outgoing Coordinator of the Local Women's Movement Lucille Mair [second from left] speaking to the gathering at the Heads of Voluntary National Organisations concerned with the welfare of women's luncheon which was held at Jamaica House last Wednesday. From left are Peggy Antrobus [who is taking over from Mrs. Mair] and Mrs. Michael Manley. Mrs. Antrobus is also in charge of the Women's Bureau, Ministry of Youth and Community Development."