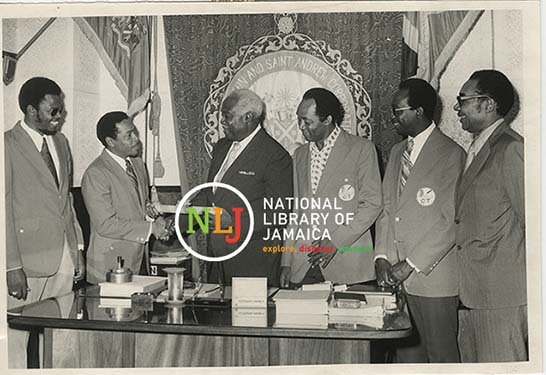 "What are all the smiles for? Well it's a message of goodwill being handed to Mr. Ossie Clarke (left) President of the Customs Tourers of Jamaica by Councillor Algon Samuels, Mayor of the KSAC for the Mayor of New York John Lindsay. The tourers will be playing a number of cricket matches in the United States and will continue with their objective as "Ambassador of Goodwill" by making courtesy calls and present gifts. Others in the picture are the Executives of the Tourers (from left are) Hendricks Porter (Secretary), Lloyd McQueen (Captain), A. Anthony Morris (Treasurer) and Mr. D. Robinson (Mayor's Assistant)."