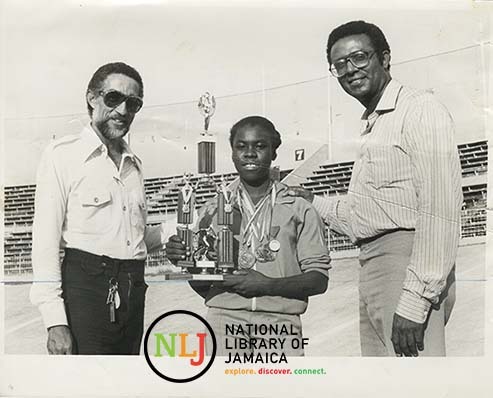 "Janet Burke, the island's leading schoolgirl sprinter, takes a break from her regular training schedule at the National Stadium to share her athletic honours with two close associates - Garth Moodie, Managing Director of York Pharmacy, who assisted with her coach, Garth Craig [left]. Burke, a student of St. Andrew High School, lowered by point two seconds, Merlene Ottey's 100 metres record of 11.6 seconds at the Girls Championships this year. She went on to equal Ottey's record of 23.6 seconds in the 200 metres and was awarded the Mutual Life Trophy for being the most outstanding athlete at the meet. The new wonder girl of sprinting, Burke, also placed second in the 200 metres at this year's Carifta Games and was a member of her school's 4x400 metres team at the Penn Relays which won a silver medal. The quiet speaking Burke is considered one of the fastest juniors in the world today at 18 years old."