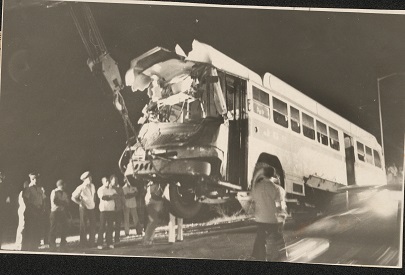 "Crash...the dreaded Causeway jinx strikes again: The death-trap Kingston to St. Catherine Causeway claimed yet another victim on Friday night.
This time it was a soldier on duty, Private Clinton
who was pronounced dead on arrival at the Kingston Public Hospital.
Nine other soldiers and a civilian were injured in the bridge collision between their vehicle and a near empty JOS bus.
It happened 10 minutes before midnight. Ten J.D.F. soldiers had just dismantled their road block to move on to another spot to continue random security blocks on highway users.
The army truck had hardly travelled 300 yards towards Kingston to begin the ascent of the humped bridge, when the J.O.S. bus - its driver the only occupant - came over the brow of the bridge and hurtled down at the truck.
The two vehicles smashed head-on. All ten uniformed soldiers were injured, Private Stewart fatally.
The driver of the army truck, Private Dyer, miraculously escaped death. So did bus driver Eric Hinds. But both have been admitted to hospital.
Both vehicles were extensively damaged and were moved near dawn yesterday.
Picture shows the wrecked bus being moved away."