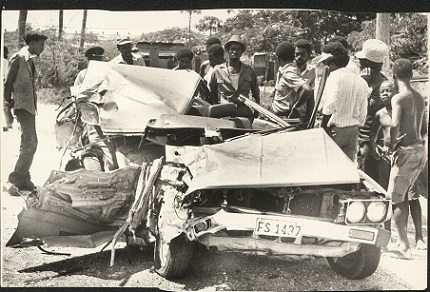 "This Toyota motor car was destroyed and two people died on the spot yesterday morning along the Spanish Town Road at the traffic light at Weymouth Drive. A third later died in the Kingston Public Hospital. Dead are Henry Reid, 52, his four-year old daughter Suzette, both of Chudleigh in Manchester and the driver of the car Khani Warren, 28, of Goshen, St. Elizabeth. According to reports, the car which was rented from Caribbean Rentals, was travelling toward Kingston when it swerved from something, got out of control, went over to the other side of the dual carriageway and collided with a truck. The other occupant of the car Javan Charlton, 19, of 21 Hillary Avenue, Kingston, has been hospitalised. The driver of the truck is Lester McKenzie of 134 Maxfield Avenue Kingston. The truck was damaged but the four occupants were not hurt."