Accident at road-a-bout opposite the Jose Marti Secondary School 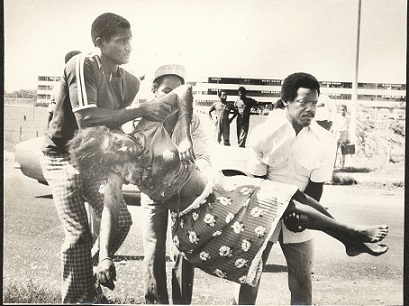 Accident at road-a-bout opposite the Jose Marti Secondary School

"Independence tragedy: twenty-four year old Loretta Blackwood of 61 Waltham Park Road being lifted to a vehicle to be rushed to the Spanish Town Hospital yesterday morning after an accident at the round about opposite the Jose Marti Secondary School. Ms. Blackwood and two children - Alton Williams seven, and his sister Neuvel Williams six, were in the back of a Toyota van being driven by Desnoes and Geddes salesman Bertie Wedderburn and proceeding towards Spanish Town. The van failed to negotiate the corner, crashed into the curb wall throwing all three on to the traffic island. The van overturned twice in the process before it mounted the island and then dragged Ms. Williams beneath the vehicle back into the road. Passersby shifted the van from above her and rushed her to hospital but she was dead on arrival. Alton received two nasty cuts to the face but Neuvel was only shaken up. The tragedy occurred at about 10:30."