JDC returning from tour in Toronto 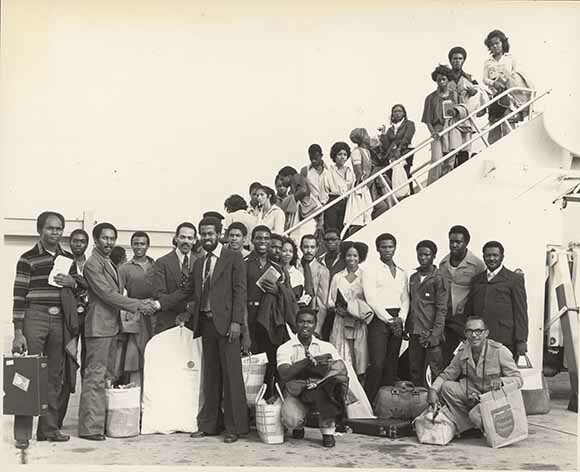 JDC returning from tour in Toronto

"Dance company returns from Toronto tour - The 36-strong newly formed Jamaica Dance Company (JDC) returned last Sunday from week-long tour of Toronto where they gave a series of lecture demonstrations for school children, dance workshops for teachers, and eight performances for the public at the Minkler Auditorium. The tour, sponsored by the Canadian-West Indian Association in Toronto, was part of that association's activities to mark the International Year of the Child. JDC artistic director Eddy Thomas (third left), said on return to Jamaica that the tour was most successful in terms of the exposure to Caribbean culture which it afforded children of Jamaican and West Indian origins as well as the Canadian public in general. "We were also able to give the people who teach these kids a better idea of the folklore and backgrounds of the many West Indians which contribute to the multi-cultural nature of the society in Toronto," Mr. Thomas said. Commenting on what he called the "warm repertoire, Mr. Thomas said that they clapped and sang their way through every performance. Photo shows the Jamaica Dance Company being greeted on return to Jamaica by Air Jamaica sales representative, Tony Fulford (shaking hands with Eddy Thomas)."