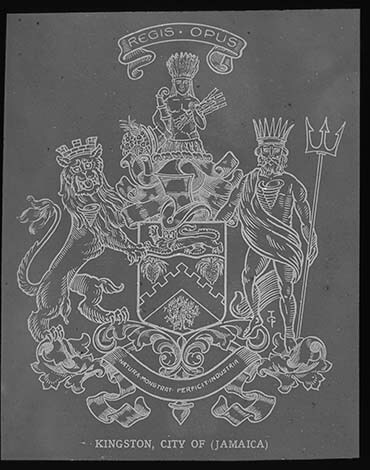 "KINGSTON, City of (Jamaica). Argent, a chevron embattled azure between two pine-apples in chief, and on a mount a coffee-tree in base proper, on a chief wavy gules a lion passant guardant or. Crest — On a wreath of the colours, a demi South American Indian, the dexter arm embracing a cornucopia inverted, in the sinister hand a bundle of sugar-canes all proper, and on an escroU over the crest the words " Regis opus." Supporters — (Dexter) a lion rampant guardant or, murally crowned azure, charged on the breast with a conch proper ; (sinister) Neptune, his mantle of a marine green, edged argent, on his head an Eastern crown or, his breast charged with a conch as on the dexter, his trident erect proper resting on the exterior arm. Motto — " Natura monstrat perficit industria."