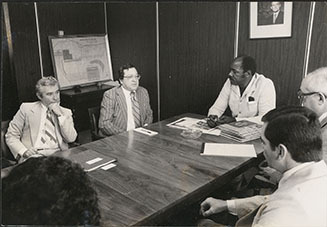 Public Utilities Minister Horace Clarke (third left) listens keenly as Mayor elect of New Orleans Ernest Morial (second left) explains his interest in future cooperation between the port of New Orleans and the Port Authority of Jamaica. Mr. Morial called on the Minister at his Ministry on Wednesday, along with four representatives of the Port of New Orleans. The five-man team is in the island to hold discussions with the local Port Authority regarding promotion of transshipment business between the two ports. other members of the team are Capt. Henry Joffray (left); Edward Reed (second right); and Ulysses De St. Germain. Traffic Manager for the New Orleans Port, Clarence Young is not included in the picture."