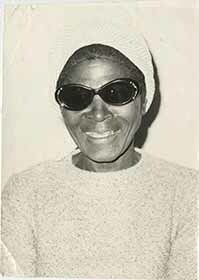 "Pleased as punch: Daily News Coinword winner - Miss Rose Christie of 5 Land Settlement Road, Prospect, Port Antonio - smiles happily upon learning that she won the major part - $675 - of the Coinword prize money. The winnings are shared with two other persons.

A regular reader of the Daily News, Miss Christie has been doing the Coinword crossword puzzle from its inception. She came very close to winning many times, sometimes with three errors and sometimes with two. These near wins motivated her and she continued doing her puzzles.

Very soon it became almost like a way of life and this dogged persistence has paid off sooner than she thought. A mother of four children who are now grown up, Miss Christie now has several grandchildren. However, she can still remember the struggle she has when she and her children's father died - they were all small and she had to bring them up on her own.

Miss Christie is not going to go on a shopping spree this Christmas with her prize money although she will take a little out of it. She intends to invest the money in a chicken farm. This way, she she will have something for a long time out of her prize money."