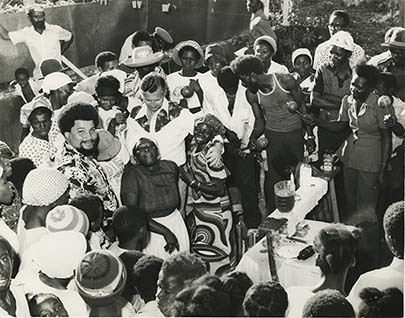 "Seaga's interest in Jamaica's folklore never dies...As the JLP Action Team moves on, one of the happiest scenes was the Leader, Eddie Seaga, relaxed, taking time out to join in one of his favourite interests. Eddie Seaga, being personally involved in Jamaica's folklore, joins in the Kumina session at Waterloo in East, St. Catherine. The occasion was the presentation of Peter Whittingham as the Candidate for that constituency. The Kumina session was organized by "Queenie" (Mrs. Kennedy), Jamaica's leading Kumina Queen...Festival gold medal winner. About 200 citizens joined in the happy session."