James Hakewill's Picturesque Tour of the Island of Jamaica

James Hakewill (1778 – 1843) was an English born architect and engraver, who did extensive travels throughout Europe and the West Indies. The National Library of Jamaica has in its holdings Hakewill’s “A Picturesque Tour of the island of Jamaica…” which was published in 1825. It is a compilation of twenty-one plates done by the artist whilst residing in Jamaica for nearly two years. Added to the sharp, inviting drawings which feature waterfalls, plantations, square, towns and harbours, are notes explaining each scene. These historical sketches give a view of life in Jamaica in the years 1820 and 1821, when the economy was still driven by an enslaved labour force, as well as details explaining architecture, political landscape and natural formations throughout the island.

Estates from “A Picturesque Tour of the island of Jamaica…” are featured in this collection. This gives a graphic representation of the layout of 19th century estates and the architecture of its buildings. 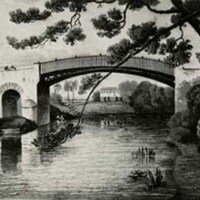 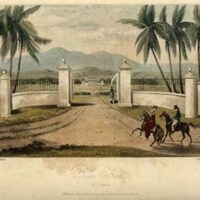 Print depicting Rose Hall in St. James. A woman is seen walking through the gates of Rose Hall. On the outside of the building, two men are riding horses. This house was owned by the infamous Annie Palmer. Rose Hall has fascinated local generations…

Waterfall on the Windward Road near Kingston 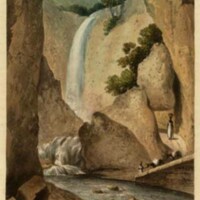 This is a print of a waterfall between rocks on a hill. The water falls into a river. Flowers and trees are also depicted. A woman carries a basket on her head while another is seen pulling two donkeys.