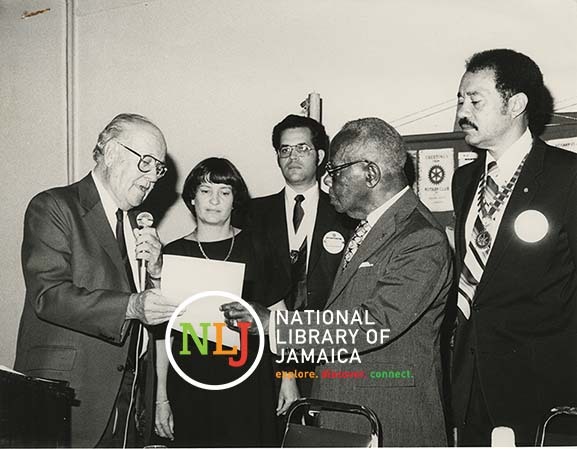 Named after the founder of the Rotary movement which today encompasses a network of clubs numbering over 19,000 worldwide, with a membership of over 900,000, the Paul Harris Award is made to individuals who have demonstrated the highest ideals of "Service Above Self", the creed which Rotarians worldwide strive to uphold.

The occasion was the official handing-over dinner of the Rotary Club of Kingston at which outgoing President, Winston Hay, JP. inducted the Club's President for 82/83, V. Roy Smith at the Jamaica Pegasus Hotel, in a dinner meeting. The award ceremony was conducted by Past District Governor, Rotary from its inception 77 years ago, declaring that the Club's founder, Paul Harris, could not have visualized the international development of the Rotary movement from its humble beginnings in 1905. He pledged to continue to support the activities of the Club and thanked members for the honour they had conferred upon him.

The object being examined is a printed citation which accompanied the Award, which is in the form of a medallion and a lapel pin."