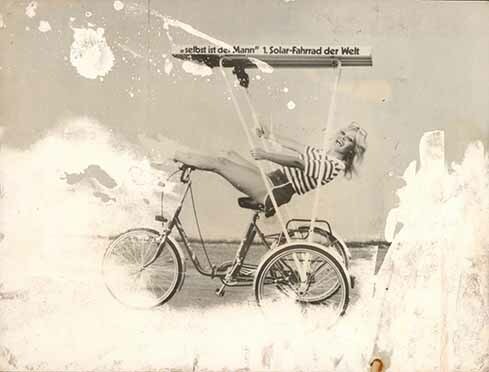 "The lady above has that free-wheeling feeling as she demonstrates the world's first solar-powered cycle in Cologne, West Germany.

In the light of the critical oil price trend, many electronics companies feel that solar energy has a bright future. In Cologne, a team of amateur engineers came up with the idea of constructing the solar-powered cycle, first of its kind, they said.

However, enjoying the privilege of being able to tap a free source of energy for transport purpose is still not a cheap proposition. The special transmission required for the solarcycle" meant that a considerable investment in addition to the purchase price of the cycle itself. But money was no obstacle to our team of inventors. They were interested in finding new ways of saving on energy costs. They feel that by developing their idea further, they will be able to lower the production costs.

How does the solarcycle work? A 120x120 centimetre sunroof is mounted on a shopping tricycle with an extended rear axle. Four modules each equipped with 30 solar cells, connected in series, are mounted on a sheet-aluminum carrier and screwed together. A three-step system of switching makes the use of three gears possible, the first (just like in cars) to get started, the second for slight uphill gradients, and a third speed gear in which all four modules are switched in series. In optimum sunlight the direct current motor has a power output of 132 watts."