The Bristol submerged cylinder used to extract power from the sea 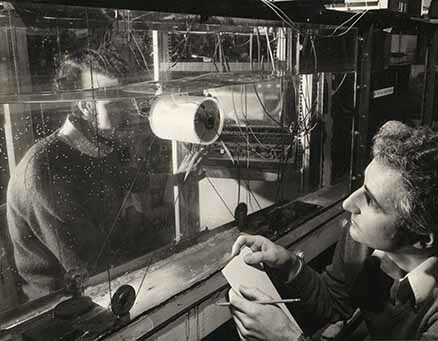 The Bristol submerged cylinder used to extract power from the sea

"This model cylinder in a test tank at the University of Bristol in south west England is the latest device being developed by British engineers to extract power from the sea. Called the Bristol Submerged Cylinder, its design is based on the results of theoretical techniques and analytical studies originally carried out to solve problems associated with the interaction of waves on such structures as oil drilling rigs.

The system consists of a cylinder moored by chains below the surface of the sea and attached to double-acting hydraulic pumps situated on the sea bed. The action of the waves passing over the cylinder causes it to make a circular movement through the sea. The chains attached to the cylinder opposite this motion and in so doing operate the hydraulic pumps to drive sea water through pipes at high pressure. This high-pressure flow is fed through a turbo-generator above sea level and the electricity produced is fed into the national grid system via undersea cables.

As the cylinder and associated equipment is totally submerged it would be capable of surviving the several the severest storms. The simple structure of a hollow cylinder - probably made of concrete - would make it cheap and relatively easy to construct and the chains which drive the hydraulic pumps would also be used to hold the cylinder on station.

Although development is still in the early stages, present calculations show that a forty kilometre line of cylinders, each 50m long with a 12m diametre, moored three metres below the surface in about forty metres of water, should produce power equivalent to that produced by a 2000 megawatt conventional power station."