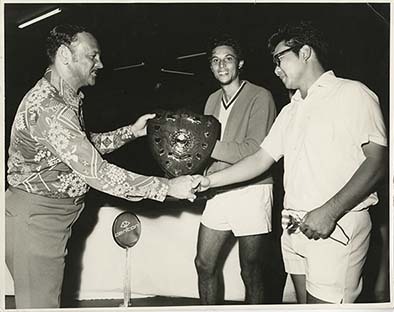 "The fourth Abbey Court Badminton Championships, came to a close on Friday night last at the National Arena. The 6-day Tournament attracted a large number of entries, and especially provided encouragement for upcoming Juniors, in that a special section allowed Juniors to complete among themselves. Based on performances in this Tournament, entrants for the Caribbean Championships in Trinidad were selected. Derrick Chin and Frederick Seixas, winners of the Men's Doubles, 'B' Division event were presented with the Martini Rossi Trophy, donated by Bryden & Evelyn Limited, and here they are seen receiving the trophy from Mr. Lloyd Isaacs, Assistant Manager of the Liquor Department, Bryden & Evelyn Limited."