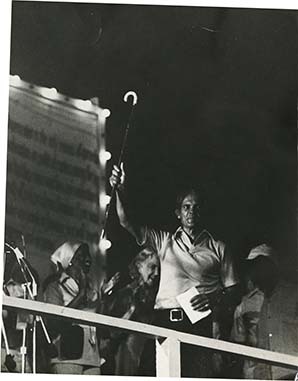 "The rod is back - PNP Leader Michael Manley holds aloft the "Rod of Heavy Manner" at the highpoint during his address to the mammoth 120,000 PNP rally in Montego Bay on Sunday night. The dramatic re-appearance of the rod came back as Mr. Manley said "Let's talk about the elections" and is interpreted as an indication of his Party's fighting spirit for the campaign."