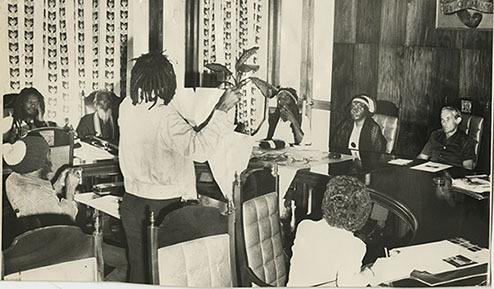 "Members of the Ras Tafarian groups from all parishes shown in the Conference Room at Jamaica House yesterday, for the second in a series of reasonings with the Prime Minister to seek greater recognition of the movement in the island, under its own religious Theocratic Government. Next to the Prime MInister is Daughter Baby You, one of four sisters at the meeting, and next to her is Bongo Rocky. About 50 members of the movement, some of whom are seen in these two pictures, were present at the meeting."