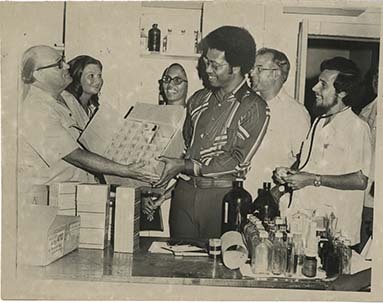 "All for the Children: The St. Richard's Children's Clinic along Red Hills Road yesterday formally received $10,000 worth of drugs from the Cathedral Church in Vienna, Austria. Deacon Ernst Bohac (left) is seen handing over a box of drugs to Parliamentary Secretary for Health Dr. Winston Davidson who received the drugs on behalf of the clinic. Others from left are Rev. Bohac's daughter Christa Wilson, Sister Collette, Father Ernest Kamath who is in charge of the St. Richard's Catholic Church and Dr. Albert Akierman. Deacon Bohac whose daughter is married to a Jamaican visited St. Richard's and on his own initiative returned to Vienna and sought assistance for the clinic."