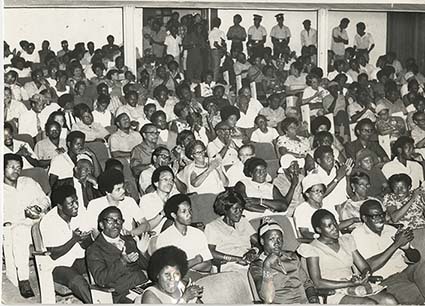 "Guyana's Prime Minister, Forbes Burnham, wins applause from a Ward Theatre audience on Friday night as he explained the considerations behind his stance on obeah in his country. Mr. Burnham said he did not legalise obeah but merely sought to allow its cultural expression. At the same time, he emphasized that it is a punishable offence when practised for fraudulent purposes...Mr. Burnham was speaking at the Public launching of the book, The Politics of Change, written by Prime Minister Manley (second from right). Others on stage are Local Government Minister Rose Leon, (third from right), Education Minister Eli Matalon (with head bent behind M. Manley), and Finance Minister David Coore beside Mr. Matalon."