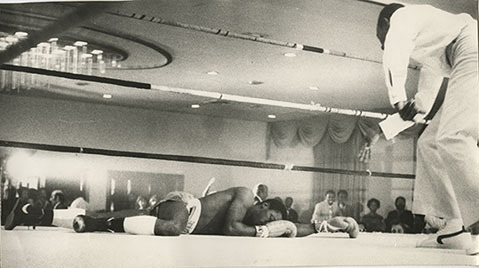 "On Tuesday night, December 1, the team of Lennie and Lucien Jnr. and the perennial, top local promoter, Lucien Chen Snr., gave local boxing fans a treat by putting on the first of such events inside the New Kingston Hotel. Richard 'Shrimpy' Clarke who was the main local hero on the three-card fight made the moment a memorable one for himself and left his many fans beaming with miles as he floored American Jimmy Brown in one minute and 17 seconds in the first round in their scheduled six round bout. In top photo Clarke, [bantamweight] is directed to a neutral corner by referee 'Speedy' Flynn [left] while Brown lies dazed on the canvas. In bottom photo Flynn gives Brown the final count."