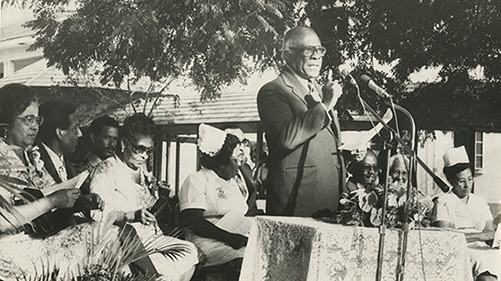 "Governor General Florizel Glasspole congratulated the staff and those who received long service awards on Tuesday at the National Chest Hospital, Barbican. He was speaking at the 40th anniversary of the hospital. The Hospital was formerly the King George Jubilee Memorial Hospital, which was built 40 years ago to fight against the deadly disease, Tuberculosis. Seated from left are: Mrs. M. V. Lowe, Senior Medical Officer; Donald miller, Permanent Secretary of Ministry of Health and Social Security; Mrs. Glasspole and Matron Carmen Brooks."