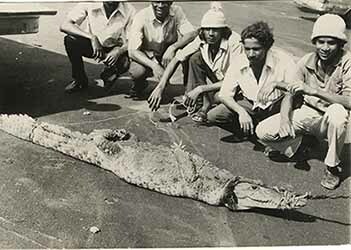 "If you are a keen crab hunter, then you should expect anything...even to be chased by an angry crocodile whose sleep you may have disturbed when you chased an elusive crab to the edge of the swamp. And for taking a snap at Devon Rhoden (third from left) this disgruntled croc found himself properly gagged and trussed up...this after Mr. Rhoden and his friends managed to regain their composure. For its pains, the seven-foot four-inch reptile, caught in the Hellshire Beach Mangrove swamps, was presented to the Zoo at Hope Gardens, and a spokesman for the Zoo said yesterday that this was the first croc they had received for the year. It may have been relatively easy for the youngsters to have attached cords to the croc's tail, and to have tied the legs, and even to attach the leash rope. But consider the means they may have used to divert the croc while they slid the gag over its snout!"