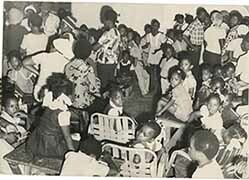 EVERY KID IS A STAR: Every school-aged child especially the tiny tots was a star as the schools opened Monday after the long summer holidays.

But the problem was whether they could all get space on the school stage, and the heartbreak was that many of them couldn't; there just wasn't the space among other things, as out cameraman found when he went out in Kingston to record the scene.

The kids being true camera stars, he had no trouble with them as their faces and bright eyes looking straight into the camera prove. But for all the cheer these two sets of problems.

In the top group the kids are lucky they are in and had commenced the day's work under the guidance of 'Miss' the teacher who seems more interested in giving her instructions than looking into the camera.

In the bottom picture the kids were waiting to get in, and some possibly wouldn't make it because of space limitations, but they did what was expected of every true star--faced the camera.

Their parents worrying over the situation were in a less obliging mood if they looked at all. Just like adults. Which is why every kid is a star."