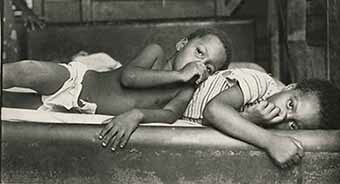 "A thumb in the face of the IYC: Ricardo and Joseph Gayle aged 2 and 4, were still in bed near mid-day when this photograph was taken. It's not because they do not like to run around and play like other normal children, but they lack the energy that being up and about takes. They had not eaten all morning and had very little the day before and the day before that, and the day before that...

The boys are two of seven children of Marjorie Gayle. Sometimes she gets them a meal, but most times she is not that lucky. The family is destitute.

Ricardo and Joseph have never been to school, and for the past year, their three sisters and other brother have been out of school. Their last school said they were not learning , and there was no space to keep them. Perhaps someone should tell them that children do not learn well on empty stomachs.

Three months from the end of the International Year of the Child, Ricardo and Joseph continue to go hungry to grow up illiterate. They do not know of IYC. They have only their Mom -- and their thumbs."