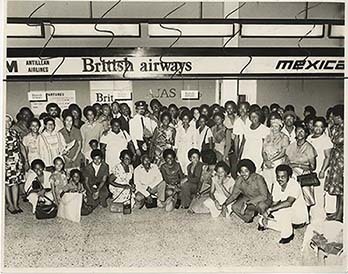 "Seen here are members of a Methodist Chorale Group before their departure on British Airways on a cultural exchange tour of Panama and Belize.

The tour promoted by the Rev. Evans Bailey included two major concerts in Panama. Members visited the Presidents of Panama and presented to him a letter of greeting from the Governor General of Jamaica. This tour coincided with the 63rd Anniversary of the commencement of construction of the Panama Canal.