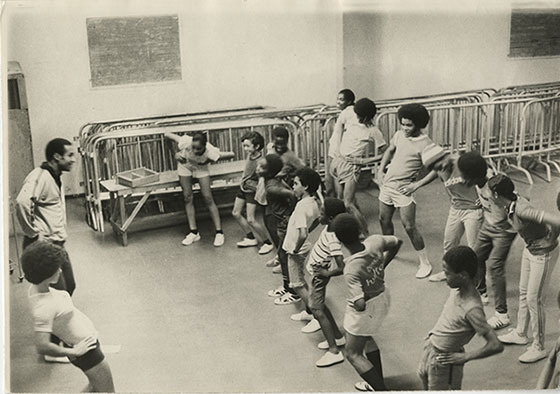 "The new coach at work in his opening session: Orville Haslam, five times Caribbean singles champion and former England representative, has his first session as national table tennis coach at the National Arena yesterday afternoon. Before an enthusiastic gathering of players called out by the Jamaica Table Tennis Association to attend the first set of sessions, the first Jamaican official national coach, the man once rated as the hardest hitter in the world, spoke to the players about what they must aim for as table tennis players, their responsibility to Jamaica whenever they represent the country, and some of the things he plans to do towards developing their talent. He also spoke to them about the important aspect of dress whether in practice of in tournaments and that the JTTA was planning for overseas tours which could give them proper exposure and help towards their development. After the brief talk the coach led his charges through a series of exercises which he said was of utmost importance towards better play. After that he had the players on five table, four to a table, for a fifteen minute session of relaxed playing before taking them across to the stadium for running exercise. Top picture shows Haslam [left] talking to a group while the bottom picture shows Haslam and Monica DeSouza [left] leading the exercises."