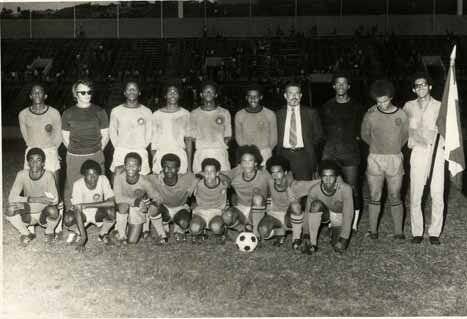 The players posing in the photograph are representatives of the Wolmer's Boys school, the Manning Cup champions. The players in back are standing while others are stooping at the front. A football is placed in front of them on the grass. Also in the photograph is a man holding a Jamaican flag. Manning Cup Football Competition is Jamaica's annual Under-19 Football (soccer) competition for boys, organized by the Inter-Secondary Sports Association and contested by eligible secondary high school teams in the Kingston
St Andrew and Saint Catherine parishes of Jamaica. Along with the DaCosta Cup contest for rural high school boys, the Manning Cup is one of the most watched football sporting events in Jamaica, rivaling the country's highest level football league National Premier League in popularity. The competition remains a key showcase for talented players and serves as a launchpad into domestic and overseas club careers as well as call up opportunities to the Jamaica national football team.