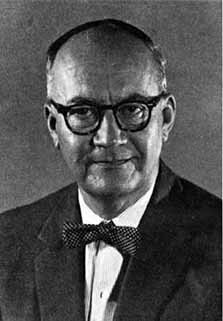 This is a portrait of Sir Philip Sherlock dressed in a black jacket, white shirt and bow tie. Philip Manderson Sherlock was born in 1902 in Jamaica. He was educated there and obtained first class honours at the University of London external BA degree in 1927.He has spent a lifetime as an educator, first in Jamaican schools, and then, from its inception in 1948, at the University of the West Indies, which he headed as President (Vice-chancellor) from 1963 to 1969. He has published sixteen books, mainly educational works on folklore and Caribbean history. His poetic output has been small but impressive, making a significant contribution to the literary renaissance which accompanied the nationalist movements of the 1940s and 1950s.