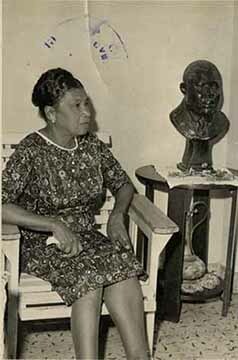 Amy Jacques Garvey, the second wife of Marcus Garvey is seen in this photograph sitting in a chair. Beside her is bust of marcus Garvey sitting on a table. Amy Jacques Garvey was a pioneering journalist and activist. She travelled to New York in 1917 and soon after became involved with publishing of the Negro World newspaper in Harlem from its inception in August 1918.