This West India Scenery Collection consists of illustrations of negro characters, the process of making sugar, etc . from sketches taken by R. Bridgens during a voyage to the island of Trinidad where he resided for seven years. Trinidad, having been titled “The Indian Paradise” for the charms of its scenery, affords a happy subject for illustrating the striking features of the regions of which it forms so interesting a portion. It is presumed that the following sketches afford a better idea than mere words can give of the various pursuits and objects which characterizes the situation in Trinidad circa the 1840s.

Stocks for hands and feet with bed and hand stocks. (From approved models) 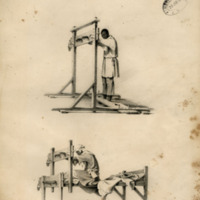 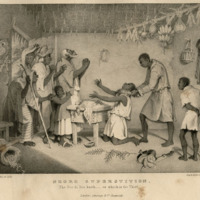 A group of Africans who seem to be engaged in a ritual. There is a dead chicken on a table, fruits are hanging from a beam in the ceiling and one man seems to be choking another who is kneeling in front of him. 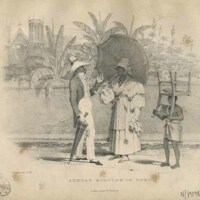 Illustration of a man and woman, both with umbrellas in hand, standing by a wall. A servant stands beside them and is carrying a chair on his head with a bible on it.