Jamaican traditional dances fall roughly into three categories: African derived, European derived and Creole, that is, a mixture of both types.

The African derived, such as Kumina, Myal and Pocomania, are mainly religious dances integral to worship ceremonies. They take the ritualists into the realm of the spiritual, and heighten their readiness for spirit possession. Jamaica is indebted largely to the Maroon Communities for the preservation of these aspects of our African Heritage.

European derived dances such as Etu, Quadrille and Maypole were originally of religious significance, but are now largely social. These usually accompany work songs and ring games and have kept their popularity throughout the years.

The Creole dances that were created in Jamaica tend to borrow elements from both European and African cultures, for example, Johnkannu/Jonkonnu - the oldest and most popular, Bruckin's, Pukkumina and Revival.

This album presents a select view of some of Jamaica’s popular traditional dance forms.

For more information on traditional Jamaican dances, visit our website at: http://nlj.gov.jm/history-notes-jamaica/ 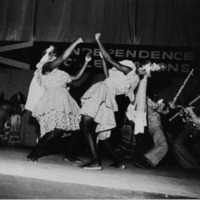 A group performs bruckins at Mello-Go-Round during the 1978 festival of the arts.

Kumina being performed in Manchioneal, Portland 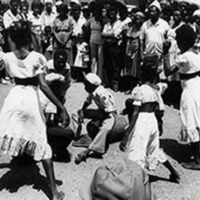 Photograph showing a small group performing the Kumina dance in Manhioneal, Portland. A much larger group of spectators look on. 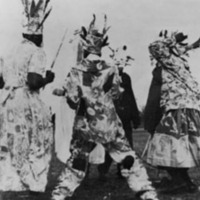