The original section of the city of Kingston was laid out to house survivors of the 1692 earthquake that destroyed Port Royal. At that time, since Jamaica had no governor, an Advisory Council decided to buy about two hundred acres of the Crawle to establish a new town. This new town was bounded on the south by Harbour Street. East, West and North Street defined the remainder of Kingston and in later centuries these borders would extend in all directions. The original grid pattern of Kingston remains the same today except for a few additions. 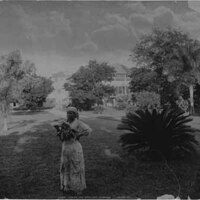 Kings House and grounds. A woman stands in the yard, one hand on hip; a bouquet of plants in the other. 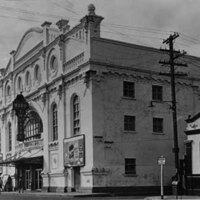 Exterior of the Ward Theatre at North Parade, Kingston 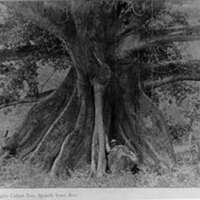 A man standing behind a boulder at the base of the trunk of the huge Tom Cringles Cotton Tree on Spanish Town Road, St. Catherine.

View the items in Kingston, Jamaica