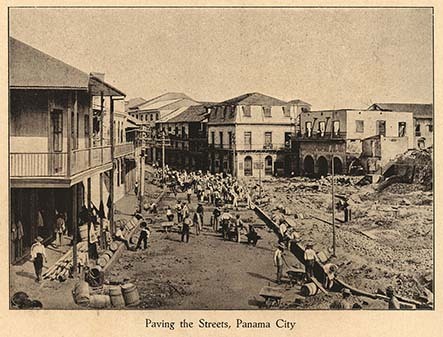 Arrival at Cristobal of S.S Ancon with 1500 labourers from Barbados to work on the site of the Panama Canal

According to Panama Canal statistics, during the French phase of the Panama Canal construction (1881-89), 84,000 persons left the island 62,000 of whom returned (McLean Petras). Migration hit its highest numbers between the years 1882 and 1884, when 32,958 left with 14,962 returning. The French Canal effort marked the second large-scale migration of Jamaicans in search of work in Panama. The first wave of migration was between 1850-55 when the construction of the Panama Railroad attracted an estimated 4,000 to 5,000 workers.

For most of the French construction period, the Jamaicans were the largest national group on the Isthmus. Between 1904 and 1913 (U.S. phase of construction) over 23,000 British West Indian labourers migrated.

The Demand for Labour

As a consequence of the refusal of Panamanians  to work in the unhealthy swamps and jungles of Panama, there was a demand for alternative cheap labour when construction of the canal began. Some Panamanians had been turned off from the high death rate decades before when the railroad was constructed. The West Indian English-speaking countries would again be the saving grace; they were presumed to have the capacity to withstand the climate and terrain. However, labourers on the canal were also drawn from European  countries.